What is a lightning rod?

The main reason to manufacture and install lightning roads in a building is to avoid impacts on people, animals and reduce structural damages in buildings by redirecting the lightning to earth safely.

In case of electrical lightning activity during a storm, many devices are vulnerable to electrical and electromechanical shocks especially in telecommunications, automation processes and services.Almost all devices include electronic technologies sensitive to electromagnetic disturbances and unexpected current variations.

Nothing can stop a lightning formation during a storm but, by installing Aiditec Systems lightning rods, an optimal level protection on people, animals and electrical installations is assured.

What does a lightning rod installation consist on?

A lightning rod installation consists on settling a metallic mast with a collector on the very top of buildings to avoid fires and, more importantly, people or animals death caused by the electrical charges. This head is connected to an electrical earth connection through a conductor cable. If the installation is performed properly, all the energy of a lightning will be leaded to earth safely.

PDC lightning rods from Aiditec Systems are the perfect solution against lightning impacts.

What is a PDC lightning rod?

A storm formation is associated to an increasement of the electrical atmospheric potential being able to overpass 10kV/m quickly. Energy is stored into the electro atmospheric capacitor formed by the outer metallic case and the axis connected to earth.

With this increasement of potential energy, two things happen simultaneously: On one hand a downward tracer is produced from the clouds that is directed to earth. On the other hand an artificial tracer is created by the lightning rod. This ascending tracer intercepts the descending one by channeling the electric discharge through the lightning rod and redirecting it to earth safely. For instance, the moment that the ascending tracer of a PDC lightning rod passes to a tracer created by any passive element- such as a Franklin point, determines the protection radius. It is known as early streamer emission. This is the reason why there are different models of PDC with different advance times in the priming according to the meters that need to be covered in each case.

Briefly, a PDC lightning conductor is a technological device that actively attracts any ray.

Below the lightning rods we manufacture

Advance RP models intercept lightnings within a radius of 107 m. ESE (Early Streamer Emission) devices provide more security than a traditional lightning rod. Advance RP models retain the electrical energy of the atmosphere, and releases it in the form of an ascending tracer, capturing the ray at a greater height.

The following new technologies are incorporated in Advance RP models: 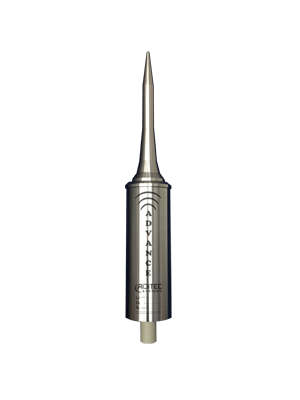 Sigma R models intercept a lightning within a radius of 107 m. ESE devices provide more security than a traditional lightning rod. This protective device retains the electrical energy of the atmosphere and releases it in the form of an ascending tracer and captures the ray at a greater height.

These models are made of stainless steel AISI 316L. Laboratory tests show its resistance to any atmospheric condition. In accordance with CTE SU8, UNE 21186, NFC 17102 y NP 4426.

Electron 15 models intercept the lightning within a radius of 40 m. ESE (Early Streamer Emission) devices provide more security than a traditional lightning rod. This protective device retains the electrical energy of the atmosphere and releases it in the form of an ascending tracer, capturing the ray at a greater height.

AISI 316L models are made of stainless steel AISI 316L. Laboratory tests show its resistance to any atmospheric condition. In accordance with CTE SU8, UNE 21186, NFC 17102 and NP 4426 standards.

This website uses cookies to improve your experience while you navigate through the website. Out of these, the cookies that are categorized as necessary are stored on your browser as they are essential for the working of basic functionalities of the website. We also use third-party cookies that help us analyze and understand how you use this website. These cookies will be stored in your browser only with your consent. You also have the option to opt-out of these cookies. But opting out of some of these cookies may affect your browsing experience.
Necessary Siempre activado
Necessary cookies are absolutely essential for the website to function properly. This category only includes cookies that ensures basic functionalities and security features of the website. These cookies do not store any personal information.
Non-necessary
Any cookies that may not be particularly necessary for the website to function and is used specifically to collect user personal data via analytics, ads, other embedded contents are termed as non-necessary cookies. It is mandatory to procure user consent prior to running these cookies on your website.
GUARDAR Y ACEPTAR